Where in The Hell is     Dorothy Parker? 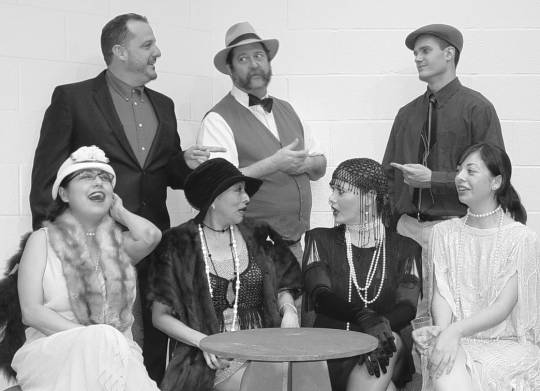 It is April, 1922.  The Algonquin Round Table is back and this wise-cracking society of wits produce a play that may ruin their careers. Based on a little-known true story.  Enjoy this WILD production of slap-stick, puns, and pathos.

It is April, 1922.  The Algonquin Round Table members, a group of wise-cracking New York critics, are producing the ill-fated Broadway play "No, Siree!" The critics become the actors (with some help of established actors) and the actors become the critics. From this little-known true story comes the original comedy  "Where in the Hell is Dorothy Parker?" by Tom Fuschetto.

Fuschetto also directs the play, which is produced by the STCC WILD student organization (Writers In Literary Discussion).

Fuschetto, WILD sponsor and an English instructor at STCC, based the play on Dorothy Parker and her Round Table cohorts.  Parker was the only female founding member of the Round Table, a renowned intellectual literary circle formed in 1919 at the Algonquin Hotel in New York City. Parker, one of the successful and influential women writers of her time, wrote for Vanity Fair magazine when she became a Round Table regular.

Fuschetto based is script on the little-known story of the group's disastrous Broadway play that they wrote and produced.

Researching his play took Fuschetto to New York's Lincoln Center, the actual Algonquin Hotel, and assorted Broadway locations in search of information on the little publicized Broadway performances of "No Siree," which ran for only one night.  "No Sirree" was the "one-night stand" of The Algonquin Round Table.  Since theater critics were acting in their creation of "No Siree," actors took the places of the newspaper critics by writing newspaper reviews of the production, which was considered by Parker as an opportunity for revenge.  However, no performer or writer got discouraged and those in the production, which included Tallulah Bankhead, Helen Hayes, Irving Berlin, Robert Benchley, Alexander Woolcott, and George S. Kaufman, went on to perform and write more plays.

For more information, contact Tom Fuschetto at 928-3487 or at tomf@stcc.cc.tx.us